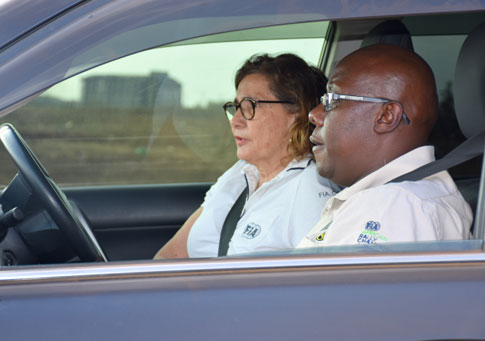 She arrived in Kenya on Friday last week and drove through the Super Special Stage at Kasarani Stadium on Monday. She described the 4.5km circuit as good with “possibilities of hosting a World Rally Championship event.”

Work continues and her proposed changes to make the circuit more competitive and safe will be implemented in readiness for the 2019 Safari Rally between July 5 and 7 this year, Phineas Kimathi, the CEO of the WRC Safari Rally Project confirmed to her.

The circuit, according to its designer Anthony Gatei who is also the Service Park Manager, will have parallel routes for drivers to race side by side. An inter-change and pavilion will be added and tight corners banked with soil for safety purposes.

Mouton, third in 1983 Marlboro Safari Rally, and chairperson of Women in Motorsport Commission of the FIA, was in Naivasha area on Tuesday. She was driven through the proposed Kedong section in a private land by Kimathi, the 1999 WRC Safari Rally F2 champion.

She said the route was perfect but could be improved to make it tougher for drivers with safety in mind. The section is a mixture of straights, sweeping corners and valleys on the foot of the scenic Mount Longonot, a truly African savannah setting.

Later she inspected the Soysambu section and on Wednesday ventured into Nakuru and Baringo counties accompanied by FIA liaison Surinder Thatthi, route designers Nazir Yakub and Anwar Sidi who noted all her concerns and proposals. Safety Officer Norris Ongalo and Gatei were also part of the team. She also inspected proposed spectator sections.

She said her desire and that of the world is to see the Safari Rally as a true test of man and machine. Although a WRC Safari will be shortened to around 500km spread over three days, it must remain hard work for the current crop of sprinters who are so evenly matched that in some events they are separated by milli seconds.

Mouton was on Monday hosted to a dinner by the Cabinet Secretary for Sports and Heritage Dr Amina Mohamed.

Mouton said she was happy to be in Kenya, a country she holds very dearly. She said for “sure Africa deserved a round of the World Rally Championship and wished Kenyan organizers good luck in their endeavor.” However, FIA conditions must be met.

Mohamed said the government has and will continue to support the Safari Rally project as the event is very dear to the Kenyan people. She added that either by fate or destiny she has come to the sports ministry at a time of the Safari revival and is happy to be part of this grand project.

Mouton will be back again in Kenya before the Safari and will drive the safety car in the entire route before the start of each section to ascertain safety of all concerned.