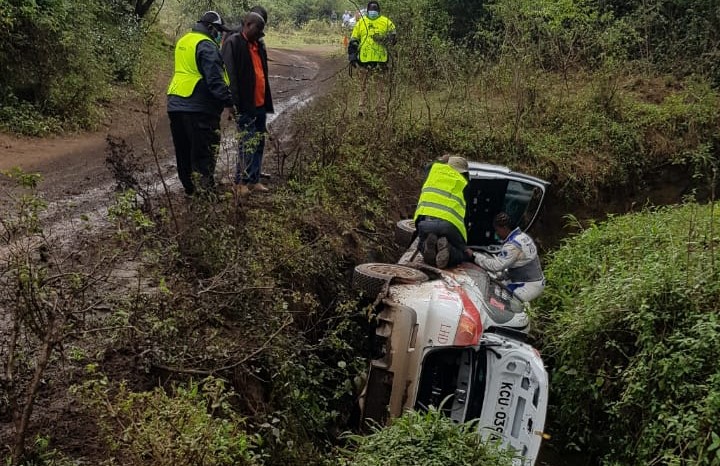 Elmentaita, Gilgil, Kenya, April 24, 2021—Hussein Malik and Linet Ayuko, in car number 26, became the first casualties of the ARC Equator Rally event after slipping into a ditch in the first loop of Leg 1.

Their Mitsubishi Lancer Evolution 10 went off a wet and slippery stretch near a narrow river crossing in the CS2 Soysambu stage.

Subsequent to their unfortunate experience, the team Version 6 Racing driver (Malik) was left to rue their early exit from the FIA African Rally Championship event saying: “We came through the wash-away; so we were climbing up and it was like giving the car power to get out of the ditch to come up, and it just started pulling towards the right and ad into the ditch. It was just too slippery. It was three kilometers to the flying finish”

“I am just feeling disappointed with my driving. Maybe I should have taken it a bit slower. There is not so much damage right now. We are just trying not to damage the car further while rescuing it out. The car didn’t roll. It just fell on the side ditch and the damage is superficial.”

This was Malik’s second retirement of the season after the KCB Nakuru Rally which traversed the same WRC Safari stages in February.

Malik confirmed that they emerged from the accident unscathed as the damage to the car, as he confirmed earlier was somewhat cosmetic.

This was definitely a bitter pill for Malik to swallow as he was hoping to test his Evolution 10 well in time for the WRC event slated for June 24-27 this year. The Equator Rally is a dry run for the WRC Safari Rally.

The second loop of the Leg 1 is a repeat run of the three Soysambu Conservancy sections-Elementeita, Soysambu, and Sleeping Warrior.