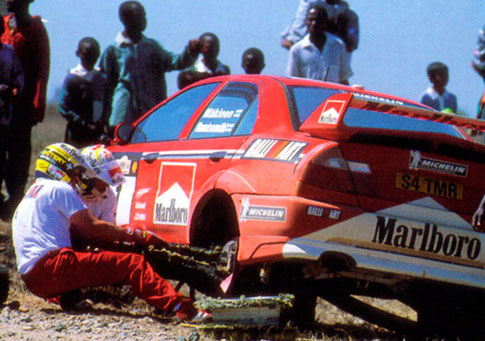 The Safari Rally represents the eighth round of the FIA World Rally Championship, and is an open road event run under sporting and technical regulations that are in many ways unique.

The Safari Rally represents the eighth round of the FIA World Rally Championship, and is an open road event run under sporting and technical regulations that are in many ways unique.

The rally was originally run every Easter, and has never been held this late in the year before. 44 cars have been entered – but two have already been forced to withdraw.

With the exception of two cars, all those entered are turbocharged and have four-wheel drive.

As will also happen in New Zealand and Australia later in the year, only five of the seven registered championship teams will be present. This year there will not be any supporting event for clubmans’ or non-homologated vehicles run in conjunction with the Safari Rally.

This is the fourth successive rally categorised by teams as a ‘rough gravel’ event, but it is faster than those run in Argentina, Cyprus and Greece. Temperatures are traditionally hot but the higher speeds and progressively revised format of the event mean the event is not so demanding on drivers as Cyprus or Greece.

The heat and the longer competitive distances however create special stresses on the tyres, in the first world rally ever to have official service parks after every high speed section.

Ford have introduced some small design changes for this year’s Safari cars, for instance the animal protection bar has been located within, not outside the bodywork. Also there is a new sumpguard designed to protect the otherwise vulnerable power steering pump, and a new design of ‘snorkel’ air intake.

Unlike the Martini drivers, Colin McRae and Carlos Sainz, Francois Delecour will be making his first visit to Africa.

Three drivers will start the Safari Rally each having won a joint record total of twenty-three world rallies. Colin McRae’s recent hattrick of wins equals performances in the past by Blomqvist, Vatanen, Biasion and Didier Auriol. One driver, Timo Salonen, has already won four in a row.

Big news at Mitsubishi is that Ian Duncan, the current Kenyan champion and 1994 event winner, will work with Ralliart making gravel notes for Freddy Loix.

Meanwhile, Mitsubishi will revert to their traditional two car line-up of Loix and Makinen on this event, and in other news Toni Gardemeister (who recently drove a Mitsubishi on the non-championship Mantta Rally) will compete for the official world championship team in Finland.

Like Ford, most of the front protection bar on the 2001 Impreza’s, driven by last years winner Richard Burns and teammates Petter Solberg and Toshihiro Arai, will be mounted internally.

Although this event does not qualify for the series, Teams Cup challenger Frederic Dor will drive the first non-works 2001 version Impreza.
Peugeot

There have been drastic measures for the company that has only scored makes’ championships points two times in the last seven events: it has been decided to nominate Rovanpera for manufacturers’ points rather than Auriol for this event.

A spokesman explained: “Harri is a good mechanic and that can matter on the Safari. It will also help reduce pressure on Auriol, who has only scored points once this year.”

Will Auriol’s de-nomination work for Peugeot? In 1998 Toyota de-nominated Auriol after a spell without good results – and immediately he won the next event! Also, last year Auriol led the Safari Rally overall, the only time SEAT ever led a World Championship event!

Skoda Team will also run a third car, for Roman Kresta (car no. 21)

This is the first time that three works-run Octavia World Rally Cars will contest the same event, with Roman Kresta driving alongside regulars Bruno Thiry and Armin Schwarz..

Team director Pavel Janeba: “We will run Roman Kresta on this event so long as this does not conflict with running our two team cars. Roman’s car will be the one used in pre-event testing, duly rebuilt.” Kresta is reigning Czech national champion and won the recent Bohemia Rally.

This is the only event this year that Hyundai do not plan to enter, but Team Manager Mark Busfield and Chief Engineer Nick Clipson will be in Kenya making plans for contesting the event in 2002. Meanwhile team driver Alister McRae is making other plans – to marry his fiancee Tara later this month.

Victory for Philippe Bugalski on the non-championship Deutschland Rally in a Xsara WRC car was encouraging, and helped gain important experience in different asphalt conditions and also using a steering wheel activated gearshift system. Citroen carried out durability testing earlier in the year in Kenya, but will not enter this event.

Group N challenger Gustavo Trelles (Nocentini team) will not compete either here or in Finland: his next appearance is due to be in New Zealand.

Only for the second time an orthodox high speed section will be held entirely on private land on the Safari. This will be the route for stages 6/9 run on the Delamere estate, south of Nakuru. Apart from the artificial superspecials at Ngong Racecourse, the only other time this happened was in the Taita Hills in 1994.

Examples of one-off rules applying to the Safari Rally: so far as the cars are concerned, they can be fitted with ‘snorkel’ type air intakes, additional headlamps, special mud flaps, front protection bars and extra large fuel tanks.

Regarding the running of the event, the route is much longer than on other events, using ‘competitive sections’ on public roads open to non-rally traffic instead of special stages on closed roads.