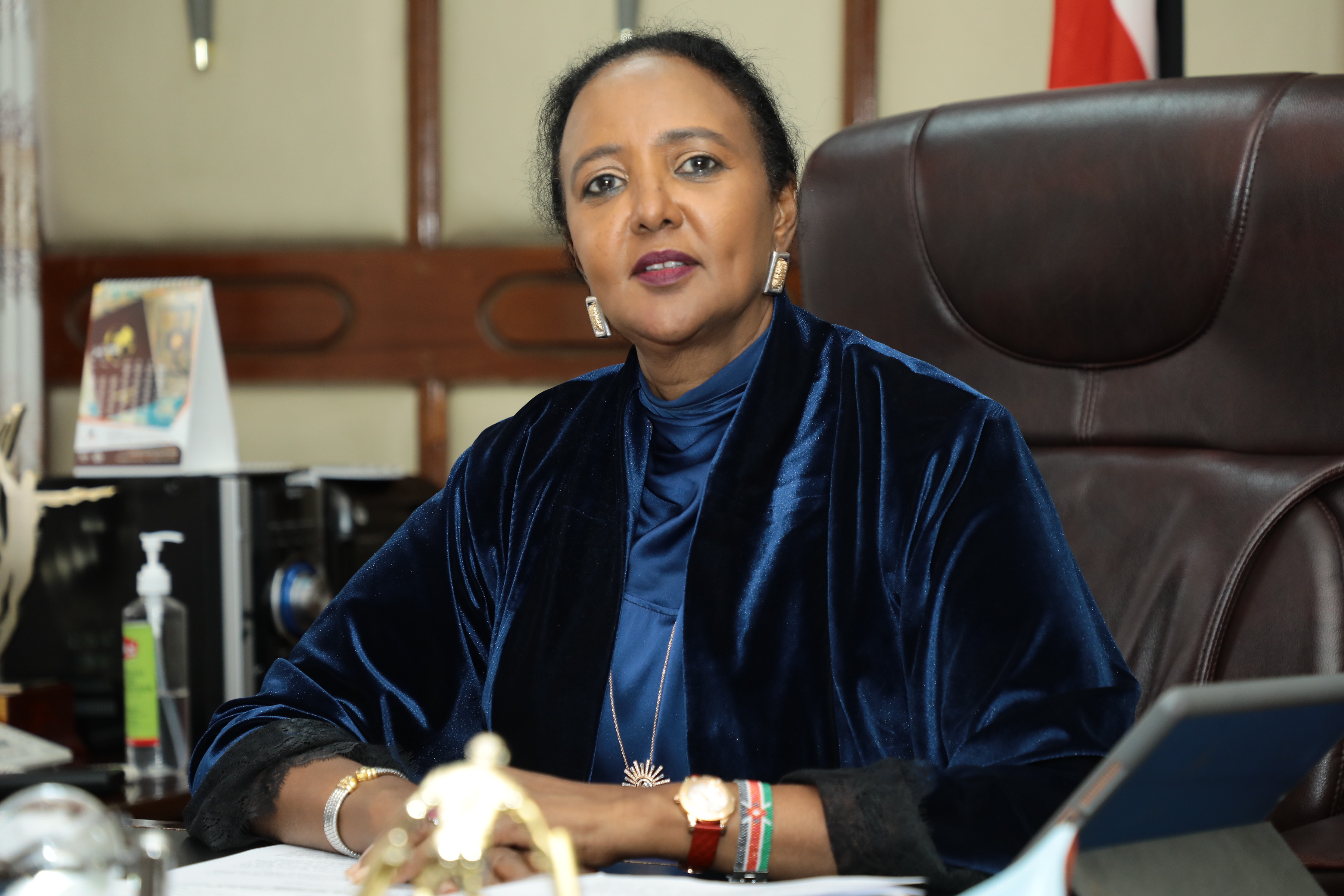 Nairobi, Friday, October 9, 2020–Kenya’s Sports Culture and Heritage Cabinet Secretary Amb. (Dr.) Amina Mohamed has been elected into the World Motor Sport Council, a key governance organ of the International Automobile Federation (FIA).
The Cabinet Secretary’s entry into the FIA’s management enhances Kenya’s presence in the global motor sports governing body.
FIA President Jean Todt said Amina’s appointment was important for the FIA’s drive for gender equality.
“Amina Mohamed, Minister for Sports, Heritage and Culture of Kenya, elected as a new member of the World Motor Sport Council. A great asset for @FIA advancing gender equality and diversity,” Todt tweeted.
“I’m honoured and excited with this singular honour and privilege which underscores the importance of Kenya on the global sports management landscape,” CS Amina said shortly after the World Motor Sport Council decision today.
“This recognition is not an individual one, but collectively represents Kenya’s and Africa’s ambition to get more involved in the management of global sport which will, in turn, translate to the development of sport on the continent, in general.
“I would like to thank His Excellency President Uhuru Kenyatta for the support he has accorded sport and his particular interest in ensuring the successful return of the iconic Safari Rally into the World Rally Championship calendar.
“My deepest gratitude also to FIA President Jean Todt for his exemplary leadership and guidance that has seen motorsport develop in leaps and bounds. President Todt has been to Kenya several times to offer his and the FIA’s support for the return of the Safari Rally to the WRC calendar.”
FIA secretary general Peter Bayer and Kenya Motor Sports Federation President Phineas Kimathi were among the first to congratulate Amb. Mohamed on her appointment to the senior position.
“I would like to extend my sincere congratulations on today’s election. I am very proud and honored to be working with you as a World Motor Sport Council Member,” Bayer said.
Kimathi, who is also the World Rally Championship Safari Rally Chief Executive Officer, said Amb. Mohamed’s appointment is a great honour to the country, especially with the Safari Rally returning to the World Rally Championship circuit in 2021.
“I wish to congratulate Amb. (Dr) Mohamed on her election to this key organ of the FIA. This shows the confidence global motorsport has in Kenya, and this development will hold us in good stead as we prepare to return to the World Rally Championship fold next year,” Kimathi said.
Besides being Safari Rally CEO, Kimathi also sits on the FIA’s World Rally Championship Commission as one of six representatives of organisers.
“I would like to thank the FIA President Jean Todt and his team for the confidence that they continue to show in Kenya and for their support,” Kimathi added.
“It behooves us to deliver a spectacular WRC Safari Rally next year, and I’d like to assure Kenyans and the world in general that we are way ahead of schedule in preparations for the 2021 WRC Safari Rally,” Kimathi added.
Founded in 1904 with its headquarters in Paris, the FIA represents 243 international motoring and sporting organisations from 146 countries across five continents.
Besides the World Motor Sport Council, the other main administrative organ of the FIA is the World Council for Automobile Mobility and Tourism.
The World Motor Sport Council is charged with the responsibility to handle all aspects of international motorsport and meets at least four times a year to decide on rules, regulations, safety, and development of motorsport at every level from karting to Formula One.
It is chaired by the FIA President with the organogram including the Deputy President for Sport, seven Vice-Presidents, 14 titular members and five members by right.
The members by right are the President of the Women in Motor Sport Commission, the President of the International Karting Commission, the representative of the Commercial Rights Holder of the F1 World Championship, the President of the FIA Manufacturers’ Commission and the President of the FIA Drivers’ Commission.
The WMSC, in its administration of international motor sport, prioritises improvements in safety and environmental standards across all forms of the sport, adopts common regulations across the various series, and nurtures motor sport’s roots by developing all forms of the sport, especially among the young and in developing countries.