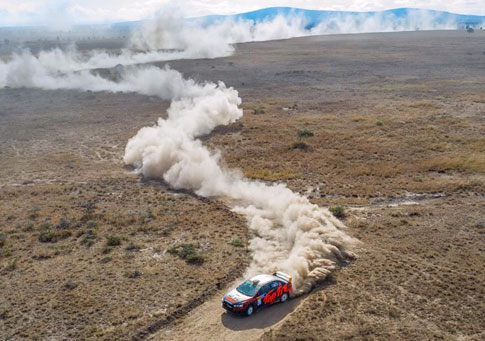 But Carl “Flash” Tundo, the five times Safari Rally winner and four times national champion is not soft. This is just an acronym standing for Son of Frank Tundo.

His father is famous as a veteran rally driver and Carl has been flying the family name high since 1995 when he first entered the Safari and finished 10th overall. Now he is the national champion expected to flag the Kenyan flag high in 2019 WRC Candidate Event Safari Rally

But at the end of the day he says he is just a Kenyan rural boy.

This came in the background of a very satisfying 2018 season, winning the Safari and five more events out of eight in a Mitsubishi Lancer EVO X co-driven by Tim Jessop.

In 2019 or beyond he wants to extend his tentacles to the African continent.

But first the most important assignment at hand is a revamped WRC Candidate Event Safari Rally, already tempting semi professional teams to return after 17 years since 2002.

Tundo’s first experience in the WRC Safari Rally marathon was not a pleasant outing which none- the- less was later to shape his career as one of the most successful drivers in recent times.

“I remember being totally in awe of the experience,” he recalls 23 years later.

“It was an amazing adventure at such a young age with no experience,” says Tundo who was navigated by Mathew Luckhurst with nostalgia about the 1995 Safari in a semi-works Subaru Impreza GS8

Tundo was able to purchase an ex-Patrick Njiru Subaru Impreza factory prepared by Subaru Motorsport Group of Japan. It was a good car which however, had received some beating in the national championship the previous year.

Although at some point a farm handy man who had sampled crude machinery like tractors, nothing still compares with his debut Safari.

“The power steering pipe burst at the top of Fluorspar, and after a bit of a panic putting a fire out and being helped by Jim Heather-Hayes, we did that whole day back to Nairobi without power steering,” says Tundo. Amazingly they finished 10th overall. The Safari though contesting the FIA 2 litre Cup (Azar Anwar 18th overall walked away with this trophy) was won by Yoshio Fujimoto and Arne Hertz in a Toyota Celica GT4.

For any major mechanical issue Tundo, only 22, would reach out into someone else’s service crew to help. ”I scrambled together friends to help out with service who knew nothing about fixing cars apart from filling them with fuel.”

Tundo returned to the Safari in 2002, the dark and closing chapter of the event where no Kenyan finished the event.

But by then he had come off age, curving a niche in the national championship and in coming years was able to define rallying and in intent on picking the rope where Kenya back to the World Championship.

And he speaks collectively of us and not leaving organizers who are working on a world class Candidate Event this before the big one in 2020.

“Of course, who wouldn’t support the return of the Safari back to the WRC? Getting state of the art rally cars and the best drivers in the world coming here will be fantastic,” he says with intent of commitment.

“In the old days local drivers who performed well used to get picked to drive in the works teams. Unfortunately that doesn’t happen anymore but having a WRC in our back yard will be truly spectacular, says “Tundo an alumni of Pembroke School in Gilgil.

However, he notes that everybody should rally behind the 2019 Candidate Event because it is extremely important and we need to focus and get it right.

Tundo thinks Kenyans would benefit from a WRC Safari which will certainly inspire the next generation to aim higher with the benchmark being WRC drivers and their status.

He is very positive of the level of commitment and competition in Kenya today.

“I think the level of competition is high but not in terms of depth. I think it’s the strongest in Africa. About 5-10 years ago there were 50 plus entrants at every event. The young guns have really stepped up to the plate, getting quicker and introducing serious machines into the competition, but unfortunately we have lost so many potential winners.

“In past performances, FIA have not graded our event well so we need to step up which I feel we are doing. The good thing is that the FIA are behind returning to Africa which they have not been in the past. So fingers crossed we put on a good show.”

In between the WRC Candidate Event and WRC Safari, Tundo says that he would like to attempt the Africa championship despite several challenges including his obligation to his day job as a commercial manager at Cargill, a bulk grain handling firm in his home-base of Nakuru.

He maintains a “let’s see” at the moment.

“I would like to do the ARC at some stage. I am in discussions with my sponsor (Menengai Oil) to see if it is possible. But it is a huge commitment on time and money and with a full time job and two small kids time is something that is precious right now. Let’s see.”

He adds: “So much difference, as I said the 1995 WRC was an endurance event, and the ARC and KNRCs have been reduced to sprints on closed roads as is the current WRC format. They are too different to even try and compare them.”

His career has not been without up downs but he singles out his fiercest rivals as best of friends outside of racing circuits and considers rallying as a sport.

“One thing rallying has given me are a bunch of great friends that I think most people would be glad to have!

Tundo is considered one of easily endorsed drivers as he matches his success with equal brand visibility for his sponsors like Dalbit and currently Menengai Oil who have been very supportive of his rallying career at national championship and last year sponsored him for the East Africa Classic Safari Rally.

Although from Pembroke, Tundo went to England for further studies and returned to work in family business, Tundo is very much a Kenyan cowboy in the rural setting. “Although I can’t describe my youth in a few words, let’s just say that I grew up in Maralal on a wheat/barley farm and apart from a few excursions overseas I have been based in Kenya, where I feel I will stay as it is one amazing place to live.”

And gain he has never been burdened by the name of his famous father Frank Tundo, a seasoned Safari driver despite having had some influence towards his career.

He adds: “Of course not (about father), am proud of it, although my friends do tease me about it. I am known as SOFT in some circles (Son of Frank Tundo). One day I hope he will get the title FOCT (Father of Carl Tundo).

“As I said my parents were a big influence by giving me the platform to pursue rallying. To that I am ever grateful. Then there is my wife who is not from a rallying family but has genuinely supported me along the way.

“From Dad while growing up in Maralal, driving was not lessons so to speak of but he definitely showed me a thing or two throughout my childhood. And gave me the tools and backing to rally. The rest has been trial and error throughout the years, learning from more experienced drivers like Rob Hellier and Alastair Cavenagh.

Alastair, definitely opened his eyes on what a car could take and that definitely was when he started getting quicker.

And obviously there is no driver without a navigator and Tundo gives his success credit to his co-driver Tim.

“Tim is an amazing friend. He is the competitive edge in the team where I lack it! We have the longest rallying partnership in Kenya and I am lucky to have him in the car.

Tundo works for Cargill, a company which deals with grains, as the head of the commercial. He is married to Chania and they have two children, Billy 6 and Zia 4. They reside in Menengai, Nakuru County.